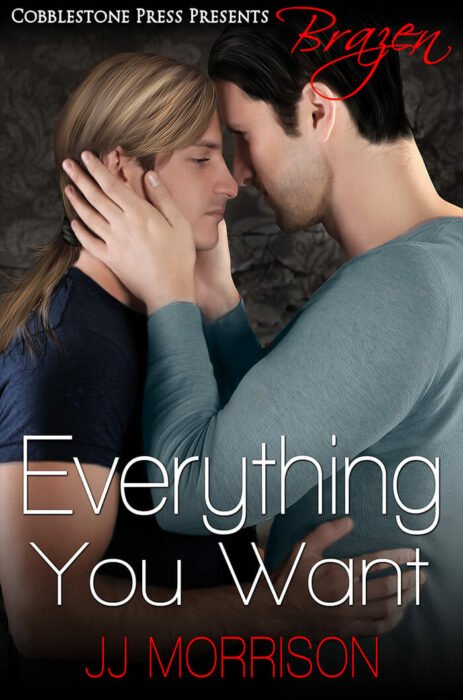 Atticus Shaw doesn’t regret his mutual pining pact with Eric Hayes while he finishes grad school and Eric strives to become a Navy SEAL. However, the time apart so new into their relationship hasn’t been easy, and the future of their relationship is uncertain.

On leave for the holidays, Eric is eager to see Shaw and spend time together after so long apart. But the holidays come with nosy friends and family, and nothing goes according to plan.

Everything You Want is the sequel to Whatever It Takes

On Sunday, Tyler flounced into the apartment ahead of Shaw and flopped dramatically on the couch. The weekend had been fun. At least for Shaw. He grinned at Tyler’s ire.

“You drama queen.” Shaw chuckled at his friend’s misery.

“You’re the meanest person I know.”

“I assume you are not counting yourself in that equation.”

“I would never make you go to a mall.” Tyler crossed his arms over his chest, and the gesture was negated by the fact that he was lying down.

“I refuse to even chance appearing on live TV with you and the way you dress.”

“You dress like you shop online and never try anything on.”

“And never try anything on,” Shaw supplied sweetly.

“If it’s too small, I donate it, so I know I try everything on.”

Tyler shrugged, looking silly because of his supine position. “Who cares if clothes are too big?”

“Okay, for starters, I know the guys you hit on in bars all wear clothes that fit, so clearly you care even if you haven’t put any thought to it. And, secondly, I remember living with you, and all your clothes used to fit.”

“That’s because you used to buy all my clothes!” He probably thought he was glaring, but it was more pouty than anything. “Are you seriously that clueless about how you dressed me and Ian like we were your own personal Ken dolls for four years?”

“It’s expedient, and I clearly can’t trust you to shop on your own. That said, since you have money to burn, I’ll come up to the city at some point and we’ll get you hooked up with a tailor and a personal shopper so we can stop these wardrobe shenanigans.”

“I don’t have shenanigans.”

“You have all the shenanigans.”

His phone vibrating in his pocket caused him to hold up his finger to stop further rejoinder. “Hello, Liam,” he answered after checking the caller ID.

“Question: is there anything you can do about orange hair?”

“Uh, no. I’m not a hairdresser. While I can advise on matters of hair, I’m in no way qualified to perform the procedure as it were. Why? What did you do?”

“Me? Nothing. Scott somehow turned his hair orange. Like tangerine orange. I told him we needed to get him to a salon, but he kept insisting you’d be able to handle it. I wasn’t around for all of the makeover magic you did with him, so I wasn’t sure.” Shaw had taken on Liam’s best friend, Scott, for a makeover several years back, turning him from tragic gamer boy to campus Adonis. And now the bubble-headed idiot had given himself orange hair.

Tyler mimed that he was going to make some food and disappeared into the kitchen, “accidentally” kicking over the shopping bags on the way.

“Once again, Scott’s ability to handle logic has not surprised me.”

“Oh, precious, that was positively restrained. There’s nothing I can do about Scott’s unfortunate choices except recommend a salon with a good reputation for color work.”

“I was going to make up an excuse to get out of talking about Scott’s hairtastrophe, but the doorbell is ringing so, cheers, sweetcheeks.” He pressed END, sliding his phone in his pocket as he pulled open the door.

All rational thought deserted him in an instant. There was Eric. As beautiful and vibrant as in every one of Shaw’s fantasies. He was in dress whites, which Shaw had only ever imagined, having never seen them in person.

“Eric,” he breathed. He didn’t even remember closing the small distance between them, but he was being crushed in Eric’s arms as the door was kicked shut.

All the doubts he’d had about their relationship vanished with the feel of Eric under his hands. He wondered if Eric was okay and how he was here early, but Eric had been smiling, which had to be good.

Shaw forgot any questions when Eric kissed him for the first time in six months. The kiss was a lingering press of lips, and then Eric dropped kisses on Shaw’s cheeks and jaw and just…everywhere.

“I missed you so much,” Eric whispered against his ear. Then his lips were being claimed again, and Eric’s tongue slid past Shaw’s lips.

He found himself pressed back against the wall, held in place with Eric’s muscular frame, and kissed over and over. Then Eric’s big hands were framing his face, and they just stared at one another.

“Hi,” Shaw managed to get out.

“Hey.” He went in for another kiss that Shaw readily surrendered to, getting lost in the touch and taste of his lover, and the intense feeling of connection.

Eric was dropping kisses on Shaw’s collarbone when he paused and tilted his head. “Babe, why’s there a guy watching us and eating ramen?”

“Tyler!” Shaw yelped, his whole body going rigid. He looked over just as Tyler, who was leaning against the wall, watching them attentively, slurped up some noodles from the Styrofoam cup.

“You told him I’m an asshole?” Tyler’s lips twitched with amusement.

“Aren’t you?” Shaw snapped, pushing at Eric’s shoulder so he could stand up straight.

Tyler shrugged one shoulder and smirked.

“And you…” Shaw said, rounding on Eric. “Aren’t you supposed to have decent situational awareness? How could you not know he was standing there?”

Eric’s gave Shaw a once-over. “I was a little distracted.”

Shaw opened his mouth to retort, choosing misdirection because he was embarrassed about being caught out by Tyler, when something caught his attention. “Oh my god. Is that a bruise on your jaw?”